Is Scripture Inspired or Inspiring? 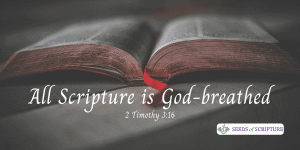 All Scripture is God-breathed and is useful for teaching, rebuking, correcting and training in righteousness, so that the servant of God may be thoroughly equipped for every good work.
2 Timothy 3:16-17 (NIV)

How did a committee of men select the religion-making, life-shaping New Testament that guides all Christians? What determined inclusion or omission? Was their ruling final for all time? What about other writings that seem relevant?

Does the Bible comprise all that God intended, nothing more and nothing less?

From one perspective, many voices helped decide which writings became Holy Scripture.  Certainly a council gathered to finalize the table of contents (397 AD) but most of the list had been well known across the Christian world for two centuries. Only books and letters that were circulating widely throughout the entire church, already being used authoritatively in worship, and considered written by apostles or close associates were included. Regionally accepted writings that had not received acceptance by a wide range of believing communities were omitted.

From another perspective, one Voice shaped our Scripture: the Holy Spirit.

The Holy Spirit gave believing communities wisdom and discernment, guiding them to embrace, memorize, copy, teach, and spread certain writings while remaining cool to others. A set of books organically emerged as authoritative, affirmed the foundational Christian truths, and became our New Testament.

The writings contained in the New Testament are exactly as God desired.

Before I learned about this natural divine process, I wondered how a council of humans was inspired to choose from among the oodles of ancient writings. I wanted to know their set of criteria. I wondered about the Gnostic gospels discovered at Nag Hammadi that might have been included but contradict Christian teachings.

It turns out men didn’t select writings to include but rather recognized those with authority given by divine inspiration.

I think we all agree that Scripture is inspiring, but Christianity claims more. The Bible describes itself as God-breathed, containing truths that equip us for life.

Let me ask you: Is the Bible inspired or merely inspiring?

Oh how I love writing about the Bible! I’ve written about the one story it tells that actually occurred and fulfilled prophesies written 700 years earlier.