The Upside Down Kingdom of God 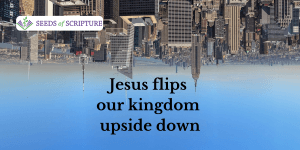 According to Mark, Jesus begins His ministry by proclaiming the good news of God’s kingdom. He’s not just talking about eternity. Jesus is alive and about to flip the world upside down.

God’s kingdom is life on earth with Jesus as King. (tweet this)

Jesus upsets the entire structure of society, the “Empire” all around us. Craig Greenfield, author of Subversive Jesus, writes:

Where Empire comes on a white military horse wielding weapons of shock and awe, the Upside-Down Kingdom comes on a donkey’s back and says love your enemy, even if he crucifies you.

Where Empire consolidates power and says my way or the highway, the Upside-Down Kingdom kneels with a towel and washes feet, saying I come to serve.

Where Empire honors the influential and celebrates the celebrity, the Upside-Down Kingdom welcomes little children and gives food to the hungry.

Where Empire is about power and status and tax breaks for the rich, the Upside-Down Kingdom is comprised of a handful of unemployed fishermen, rejected bureaucrats, a prostitute, and some failed revolutionaries.

Where Empire is a rat race to the top, the Upside-Down Kingdom says the last should be first, losers are winners, and the most important among us will do the dishes.

In this Kingdom, our King lays down His life even for those who hate and reject Him. It’s a place of radical enemy love in the midst of a world of violence.

This Kingdom might be Good News to the poor but uncomfortable for those who want to maintain the status quo.
(tweet this)

How can followers of Jesus bring the Kingdom to our circle of influence?
What must we do to shift from Empire building to Kingdom building?

I’ve written on Jesus’ upside-down ways before:
Deeper friendships with upside-down thinking
The upside-down Kingdom is not easy, but it is better