Are You Feeling Stuck Inside? 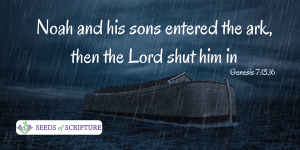 On that very day Noah and his sons, …together with his wife and the wives of his three sons, entered the ark …Then the Lord shut him in. For forty days the flood kept coming on the earth, and as the waters increased they lifted the ark high above the earth.
Genesis 7:13,16-17 (NIV)

You’ve heard the flood story. It rained for 40 days and nights while Noah, his family and lots of animals are stuck (I mean safe) on the ark. The Arky, Arky song tells the story. Go ahead, listen. It’ll bring a smile.

Perhaps you’re feeling like Noah after being stuck inside your home for 40 days. Noah had no idea what was ahead. God gave Noah a vague promise: “I will establish my covenant with you, and you will enter the ark.” (Gen 6:18)

In other words, God said “Trust me.”

We know how the story ends: Noah leaves the ark, plants a productive vineyard, and repopulates the world. But Noah couldn’t see the future beyond his curved wooden walls. When will this rain stop? How long until the water recedes? What will the world be like? Amid the uncertainty, the family quarrels, and the animal chaos, Noah could only rely on God’s promise.

Can you relate? We’re in the same boat facing an uncertain end to COVID-19 and an undefined world.

The good news is that Noah disembarks, albeit after a long process. Unfortunately, the rain was only the beginning. The ark remained afloat for 150 days before landing on a mountain (Gen 8:3-4). About 3 months later Noah saw the mountain tops and opened the ark’s window (8:6). Just smell that fresh air!

Hopeful, Noah tested the waters with a raven, then a dove – two failed attempts. Can you feel his disappointment when the exhausted dove returned? How much longer? How many tests? Do you feel like Noah when state officials prolong stay-at-home orders and cancel school for the year?

A week later, Noah’s dove discovered an olive leaf (8:11). Imagine the relief and hope! The end is in sight! Yet another, more hopeful, week and Noah’s dove didn’t return. It’s over!

In all, Noah was safe inside the ark for a year and his first action was to build an altar and praise God (8:20).

We don’t know how long we’ll stay safely inside our homes.
We do know it will end.
What will you do first?

Noah has been a frequent topic on Seeds of Scripture. Click these links to know how to have Faith like Noah or about the flood’s grim reality that God drowned people.