Why is David a Man after God’s Own Heart? 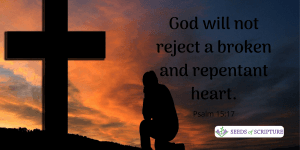 David was conscience-stricken after he had counted the fighting men and he said to the Lord, “I have sinned greatly in what I have done. Now, O Lord, I beg you, take away the guilt of your servant. I have done a very foolish thing.”
2 Sam 24:10 (NIV)

We remember that David slept with Bathsheba, another man’s wife, and had her husband killed when his plan to hide her pregnancy failed. How could God bless this deceiving adulterer turned murderer?

Our judicial system would put David in jail. Israel’s law required death for both adultery and murder. David committed major crimes on top of sins that seem less offensive, yet God selects him as a model follower.

Prior to today’s verses, David admired his own accomplishments and bolstered his sense of security by counting the size of his army. This violated God’s instructions (Deut 17:16) to trust Him alone. It also insulted the One who had protected Israel and delivered victories over many enemies.

Why does God honor a man who can’t trust Him? Reread today’s scripture and notice David’s response.

David grieves over his disobedience. He doesn’t dismiss the command as applying only to Moses’ generation. He blames no one but himself, calling his lack of trust a great sin. David humbles himself before God and repents. In a servant’s posture, he begs for God’s forgiveness, knowing he deserves punishment.

God loves David’s heart. David makes mistakes like all of us. But because he accepts responsibility and shows remorse, he is a man after God’s own heart (Acts 13:22). We can learn from David:

We all sin. With hearts like David, let’s spend some time repenting before God. Will you join me?

You will not reject a broken and repentant heart, O God.
Psalm 51:17 (NLT)

Learn more about the meaning of repentance in these posts:
What does repentance mean?
It’s not about being sorry