Joseph Gave Up His Dreams 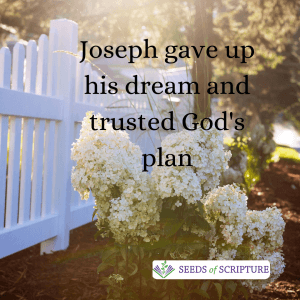 This is how Jesus the Messiah was born. His mother, Mary, was engaged to be married to Joseph. But before the marriage took place, while she was still a virgin, she became pregnant through the power of the Holy Spirit. Joseph, her fiancé, was a good man and did not want to disgrace her publicly, so he decided to break the engagement quietly.
Matthew 1:18-19 (NLT)

Since we know it by heart, let’s take a different view. Let’s consider Joseph, Mary’s fiancé, a good man.

By merging several Bible translations we learn that Joseph was righteous, noble, just, and followed Jewish law. Indeed, he was a good man. Before Mary’s big announcement, Joseph dreamed of their happy life together in a cozy home with many children under foot. Joseph would succeed as a carpenter and support his family well.

Can you imagine? Joseph was probably angry and confused and grieving the loss of what could have been. This wasn’t supposed to happen to him! His solution was to erase the problem. Even though he loved Mary, surely he could find another wife and fulfill his dreams for a family – a normal life on the traditional path.

We know that in a dream that night, an angel told Joseph to marry Mary and name her son Jesus. The message was undeniably from God, so he obeyed. Joseph, the righteous and noble Jew, watched his dream die as he accepted the shame and disgrace of Mary’s unexpected pregnancy. He sacrificed his reputation along with Mary. Can you imagine the village rumors?

Has your life gone according to plan?
If not, can you let go of the dream and trust that God has a better plan?